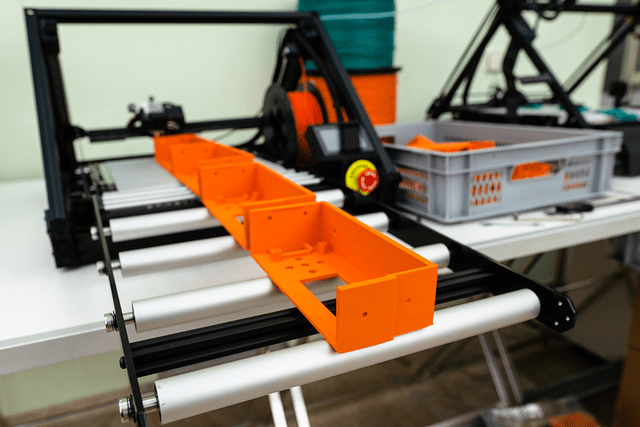 This is the third time founders Artur Steffen and Martin Huber are participating in the Digital Demo Days in Düsseldorf. The first time they attended was in 2019 with the prototype of their 3D belt printer. The event was one of the starting signals for the foundation of iFactory3D.

The Digital Demo Days took place again this year to provide inspiration to interested parties and entrepreneurs on digital topics. Well over 3,000 visitors gathered for the sixth edition of the event organized by digihub Düsseldorf/Rheinland. The event took place in the spacious Areal Böhler with its industrial charm. More than 200 national as well as international start-ups and companies took the opportunity to present their technical innovations in an expert setting, among others in the fields of sustainability, metaverse and on the topic of Hi-Tech NRW. Among the exhibitors were Martin Huber and Artur Steffen, who presented their B2B 3D belt printer at the event. This was not the first time that the founders of iFactory3D had been part of the innovation-driving atmosphere.

Back in 2019, the duo brought one of the first versions of their belt printer to Digital Demo Day. After about a year of research and development on the technology, they sought initial opinions from the professional audience. “With our prototype, we encountered a lot of interest at the Digital Demo Days, and a lot of encouragement. In no small part, these experiences strengthened our decision to pursue our approach further and, a little over a year later, to found iFactory3D. So we have been fully committing ourselves to 3D belt printing” says Artur Steffen, CEO of iFactory3D.

A product perfected over the years

A lot has happened over the years, especially with the product itself. After a Kickstarter campaign provided the necessary capital for the belt printer at the end of 2020 and the first customers were able to use the first model, the “One”, it quickly became apparent that the printer closes a crucial gap between classic 3D printing and mass production processes such as injection molding. However, the demands placed on the printer for use in industry are far higher than in the 3D printing scene, to which the One was primarily intended. For the founders, this meant that the time was ripe for a conveyor belt printer for the B2B sector, and so the One Pro was born, which has now been showcased at DDD22.

“We were able to meet many of our partners, business customers, and prospective partners from the NRW area. It is always nice to demonstrate the company’s progress and developments directly through our fully engineered 3D belt printer model. The prospect of seeing the printer in action has also drawn some of our social media followers to Areal Böhler. It is exciting seeing what fascinates people about our technology and, above all, what they want to use it for. This gives us inspiration for further developments and completely new 3D belt printers.”

A special matter of heart for the series founder is the opportunity the printer offers aspiring entrepreneurs:

“This year, too, people came to us who discovered additive manufacturing for themselves at the DDD22 to put their ideas into practice. And the prospect of automated series production in minimal space with maximum component flexibility encourages many to start up and become independent. And that’s exactly what we want to bring about with our printer: More innovation. More independence. Limitless possibilities.”

iFactory3D is already looking forward to the next Digital Demo Day next year; as every year again with great organization, inspiring atmosphere, and even more exciting contacts.