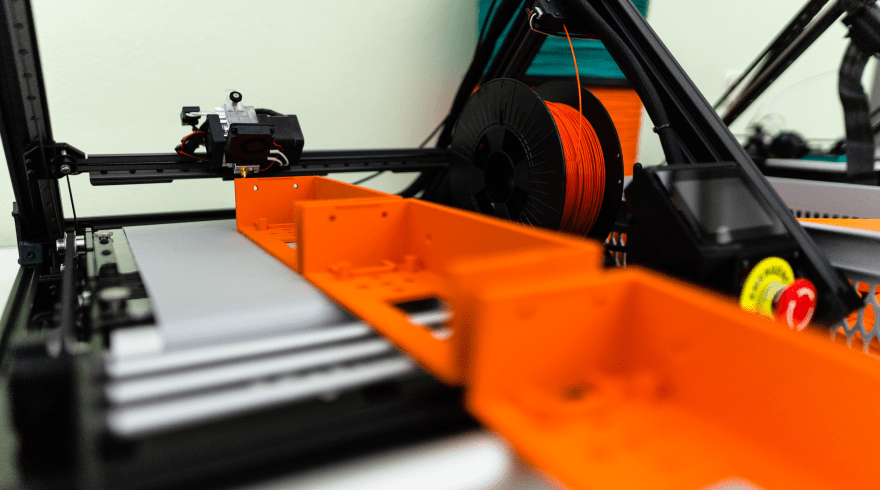 German 3D printing company iFactory3D, founded in 2020 by Artur Steffen and Martin Huber, announces the launch of its advanced 3D belt printer. It has the potential to revolutionize existing manufacturing processes.

When one thinks of industrial manufacturing processes, less positive attributes quickly come to mind, such as: expensive, time-consuming or wasteful.

While additive manufacturing addresses many of these issues and offers an alternative to traditional processes, it still has significant limitations in terms of scale and automation. As a result, 3D printing hasn’t really found its way into large-scale production. iFactory3D wants to change that and is closing the procedural gaps in additive manufacturing by using a conveyor belt instead of a fixed print bed. The result is the One Pro – the world’s most advanced 3D belt printer.

The One Pro is the result of a decade of 3D printing experience and continuous development from the first prototype that sat in iFactory3D’s workshop back in 2018. It has been modified with great attention to detail based on input from customers, the 3D printing community and industry experts. The result is a model that is made from the best components from mostly European manufacturers while complying with industry standards. This makes it a world-class 3D printer, made in Germany.

Series production for months with a 3D conveyor belt printer

Thanks to the integrated conveyor belt, the 3D printer can print objects of theoretically infinite length. Furthermore, it enables series production in a process that minimizes human-machine interaction. Topping it all off, the 45-degree angle can print far more complex geometries than usual 3D printers – cavity printing included. Artur Steffen, co-founder and CEO of iFactory3D, says, “We have a customer who loaded the printer with a large roll of filament material and went on vacation for a week. When he came back, the basket at the end of the belt was full of the objects he wanted printed. We also have customers who want to print their entire product line or mass-produce for months. That’s possible with our 3D belt printer.”

In addition to the flexible application possibilities, this 3D printer also offers great material savings. In both terms: by avoiding overproduction and by using less material in the additive manufacturing process itself. With AM technology, companies can drastically reduce their waste by producing items only when they are needed. The One Pro actually uses less material than comparable 3D printers because it is designed to require fewer support structures.

This is not the only reason why up to 40% of the production budget can be saved, which no longer has to be spent on injection molding and employee salaries. The distances traveled to and from the printer, which occur with conventional printers after each printing process, are drastically reduced. Also, the post-processing for removing support structures or scarfing / filing of the surface is eliminated to a large extent.

iFactory3D wants to enable everyone to produce without limitations

Currently, the company is the only B2B company in the world developing 3D belt printers. They want to expand their international market presence, for example with technological advancements to start and monitor print jobs remotely. This will make additive series production even more efficient and ultimately a viable competitor to long-established large-scale manufacturing processes.

Martin Huber, co-founder and CTO of iFactory3D, says of his novel 3D belt technology, “I remember needing a large number of long custom parts for a project in 2018. With the limited space in normal 3D printers, I didn’t get very far. And the quantity of a few hundred parts needed was out of proportion to the cost of injection molding. I needed to find another solution that would solve all my problems in one go. So, I set about developing a suitable conveyor belt 3D printer. And we were eager to share my result because we’re certainly not alone in having problems of this kind. Now we’re giving countless companies and people around the world the ability to manufacture their own products without limitations.”