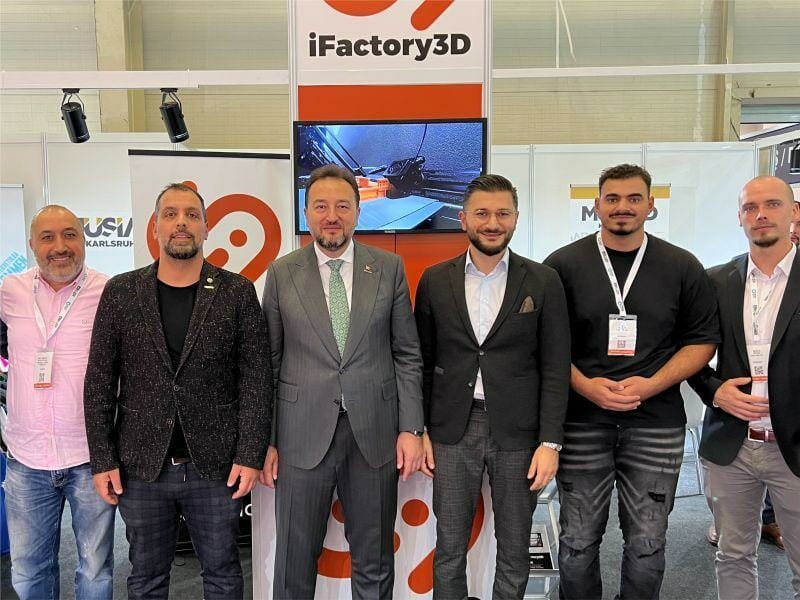 Parts of the multicultural team at iFactory3D traveled to the Musiad Expo in Istanbul for the first time this year. The emerging branch of the manufacturing industry in Turkey shows a promising demand for innovative production processes.

Musiad Expo was held for the 19th time, again in Istanbul after the last one was held there in 2020. The fair has enjoyed growing popularity in recent years, attracting more and more exhibitors from various industries. This year, for the first time, the show was open to international exhibitors. iFactory3D did not miss this chance to establish contacts in the Turkish manufacturing world and to present automated additive manufacturing to a large sector. During the 4 days that the fair took place at the Tüyab Fair Conventions and Congress Center over the first weekend of November, iFactory3D was present at its exhibition booth.

Our multicultural envoys had engaging conversations with representatives from around 50 countries over this time. The common factor for all of them was the fascination they felt for a 3D belt printer with its possibilities. They were able to exchange ideas in English, German, Turkish and Arabic on the advantages of an automated 3D printer for the production of small batches. The iFactory3D team brought along a concept printer for design studios and architects’ offices. But its timeless look is also suitable for any industry where long or multiple parts need to be stylishly serialized. The model is characterized by its space-saving construction, and a minimalist modern design in brushed metal. And by attending this trade show, it was possible to demonstrate the printer’s particularly high travel capability, as it got there in a suitcase by airplane.

But also the One Pro, the 3D belt printer for professional applications in industrial standard, was virtually represented at iFactory3D’s booth. Serial prints of a wide variety flickered in a continuous loop through the exhibition hall via a flat screen. From screw holders to specific tools and technical components to medical products such as orthopedic shoe soles. Only topped by the timelapse recordings of meter-long prints. For example, the man-high model of the Berlin TV tower or a 2,18m long rocket. For each of these jobs, the One Pro printed reliably for several days at a stretch. The Middle East’s great interest in this manufacturing solution stems from its longstanding awareness of the problems regarding subtractive manufacturing. So, people are ready for new solutions that can deliver more flexibility and sustainability. The high savings potential both in terms of material and (labor) time, and general costs were also immediately recognized.

Turkey on the rise with additive manufacturing technologies

As in 2020, Turkish President Recep Erdogan did not miss the opportunity to fly the flag for the country and its continuously growing economy. The presence and thus expressed support of the president illustrates the importance of Musiad Expo. Turkey’s existing potential to further establish itself as a thriving manufacturing base can be sustainably established through additive manufacturing. The low investment costs compared to traditional manufacturing processes provide an accelerating effect, as a successful integration and exponential spread can be achieved quickly and easily. iFactory3D is looking forward to actively participate in this movement with its products.